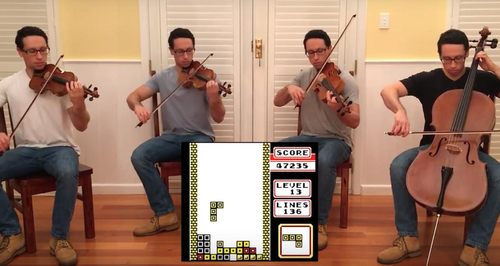 We all love a game of Tetris. But we *really* love a Tetris string quartet.

YouTuber One Nerd Band has created a genius string quartet arrangement of the Tetris theme. To add further brilliance, he plays all four parts himself in some sort of insane multi-screen illusion - yes, violin, viola and cello. Talented guy!

He said: "Like many people, I love playing the addicting game of Tetris, and would always find myself singing the theme music long after I had stopped playing. So I thought why not make a better version of the original game boy audio theme song."

The original theme is taken from a Russian folk song "Korobeiniki", which was arranged for the 1989 release of the game by Japanese composer, musician and sound designer Hirokazu Tanaka.