The entire history of classical music in cat gifs 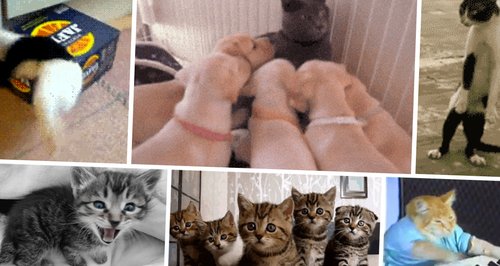 Each musical period and development in classical music, ably explained to you via the medium of cute cat gifs.

Cats are important. Here's the history of music, according to them...

In the beginning there was just one voice, singing one line. Pope Gregory did it first, according to some historians. We imagine it would've been something like this:

Then there were two lines, singing together harmoniously. It was beautiful.

The choirs just kept getting bigger. Thomas Tallis' masterpiece Spem in Alium was written for 40 independent voices, but here's a quintet doing a good impression, diligently watching the conductor.

Claudio Monteverdi cared not for what had gone before. He just wanted to be different. He thought music should have a bit more style and drama.

Great German Baroque composers like Schutz, Handel and Bach took ideas, styles and pieces from Italy, and used them as their own. Those big, musical genius bullies.

George Frideric Handel's regal musical extravaganza took over the River Thames, cementing his reputation as one of the most respected and loved composers of his day. This landmark occasion passed without a single person being harmed. Cats, though...

The Baroque and Classical periods saw a massive development in instrumental styles and performance ornamentation, including staccato, illustrated here.

1756 – The birth of Wolfgang Amadeus Mozart

Child prodigy, keyboard virtuoso, genius composer, wine-lover and all-round fun guy. We're sure he was fond of cats too.

He revolutionised the symphony and chamber music, and changed the course of music forever. But he sure was grumpy.

Now for a few extraordinary virtuosos. Paganini, Schumann and Liszt. All musical geniuses. All show-offs.

Things suddenly got very dramatic. There were now dwarves and scary giants on the opera stage.

On the peninsula, Verdi was taking opera to new heights of expression, drama and emotion.

But operatic composers from the British Isles at that time were somewhat less successful, failing to scale Verdi's heights.

Stravinsky's modern rhythms and harmonies sparked outrage, fights and riots at the premiere of his ballet score in Paris.

The last century has taken symphonic music in new directions and to new audiences – from massive cinematic scores, through to the new genre of orchestral video game music.

Things are now getting rather silly, making Serialism sound like easy-listening in comparison. Stockhausen's Helicopter Quartet, anyone?

Composers like Terry Riley, Steve Reich, Philip Glass, Michael Nyman and John Adams have championed a new style of music, based on motivic and rhythmic repetition and thematic loops.

And to the present day…

With classical music's thriving traditions now accessible to so many through recordings, downloads, the online world and social media, all we need to do is find what makes us happy, and indulge in it.

More cats: 12 of the cutest moments in classical music >