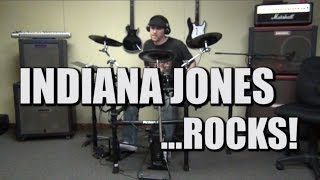 John Williams' Indiana Jones theme has been turned into an epic one-man heavy metal version thanks to a solo artist calling himself TheHumanTim.

Stuffed with face-melting guitar solos and double bass drum pedal action, TheHumanTim's version is a medley of some of the most popular Williams themes from the Indiana Jones movies.

Notably, it features a triumphant version of the main Raiders March, as well as a delicate, power ballad-esque version of Marion's Theme from Raiders of the Lost Ark.

It's not the first time TheHumanTim has taken on an iconic theme and given it the one-man-band metal treatment - his YouTube channel also contains versions of John Williams' music from Star Wars as well as music from the Zelda and Tetris video games.