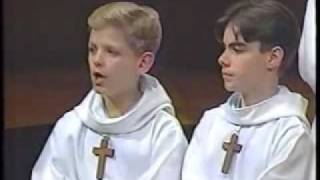 Two choirboys sing a duet for two cats, with lyrics consisting entirely of the word ‘meow’. And somehow, they keep a straight face...

This hilarious ‘Duetto buffo di due gatti’ (‘Funny duet for two cats’) is said to be the work of Gioachino Rossini – although some argue it was written by someone else in 1825, who was compiling a work which drew on Rossini’s 1816 opera, Otello.

The duet for two sopranos is sung in this video by two meowing choirboys from the French boys choir Les Petits Chanteurs a la Croix de Bois.

Impressively, they managed to stay fairly poker-faced throughout the video, even when the audience erupts into laughter at the impressively authentic ‘meows’ of the boy on the right.

A choir sang the entire William Tell Overture while galloping