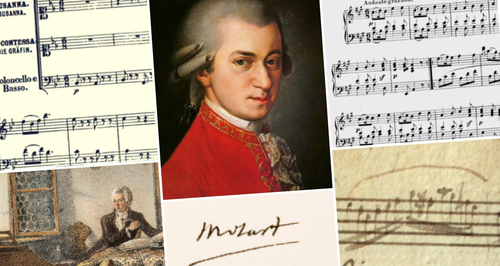 Wolfgang Amadeus Mozart (1756-1791) lived for just 35 years, but in that time he wrote some of the greatest classical music of all time. Here are the ten pieces by Mozart that we guarantee will enrich and change your life.

1. The Marriage of Figaro

Mozart wrote this enchanting opera in 1786 and it tells the story of the Count and Countess Almaviva and two of their staff – the maid Susanna and the count’s valet Figaro. The opera actually follows on from the plot of The Barber of Seville (famously made into an opera by Rossini) and contains some of Mozart’s most wonderful music including Cherubino’s beautifully simple ‘Voi che sapete’ and the ‘Sull’aria’ duet – which rather famously makes an appearance in The Shawshank Redemption.

According to Peter Shaffer’s play (later made into a film) Amadeus, Mozart literally wrote this piece on his deathbed, having been poisoned by Salieri. But what *is* true is that the piece was left unfinished when Mozart died in 1791. It was anonymously commissioned by Count von Walsegg in memory of his wife who’d died that year – the Count may have wanted to take credit for the work himself. Mozart’s pupil Sussmayr completed the work, but the gorgeous ‘Lacrimosa’ and ‘Kyrie’ are Mozart at his exquisite best.

This is the last symphony Mozart composed and writing in The Guardian, music critic Tom Service has said the work “is written at the furthest edges of the possible for Mozart, in terms of seeing just how many different expressive and compositional contrasts he can cram into a single symphony”. The ‘Jupiter’ sees the composer flexing all his musical muscles – there’s the intricate Molto Allegro movement that brings together sonata form and fugue, counterpoint and of course captivating melodies. Oh and the nickname probably wasn’t one Mozart came up with, but it’s seems appropriate for what is arguably his greatest symphony.

A Classic FM Hall of Fame former No.1, the Clarinet Concerto is one of Mozart’s best-loved works. It was written shortly before Mozart’s death for the clarinettist Anton Stadler and has three movements. It was originally written for basset horn, a member of the clarinet family, but Mozart was probably eventually convinced that it worked better for clarinet. Try the heart-stoppingly beautiful Adagio.

This isn’t one of Mozart’s best-known works but it’s absolutely one of his best. It’s somewhere in between a symphony and a concerto and the sublime second movement was written just after Mozart’s mother died. You can hear a beautiful sadness in the elegant harmonic twists and the meditative space given to the two soloists.

Read more: the best music by Mozart for babies >

Mozart wrote 18 sonatas for solo piano and this is one of his most famous. Jumping on the 18th century trend for all things Turkish, Mozart uses a ‘Turkish’-style march in this sonata’s third movement. Putting aside the question of how Turkish it actually is… the movement has become one of the most famous works ever written for piano – and then this is this version, re-interpreted by the Russian pianist Arcadi Volodos and performed here by the great virtuoso Yuja Wang.

This grand and emotionally charged concerto is one of Mozart’s very few minor-key works, and uses the biggest orchestra of any of his concertos. It was reportedly one of Beethoven’s favourite piano works, and we can’t argue with his judgment.

8. Concerto for Flute and Harp

This unusual pairing of instruments came about from a commission by the fantastically named Adrien-Louis de Bonnières, who played flute, and wanted a piece to play with this daughter, who played the harp. The piece is completely enchanting – but Mozart himself wasn’t convinced by the instrumentation and never wrote another work for harp.

Mozart was a master of chamber music, and this work shows off his full compositional power in smaller settings. This first movement of this string quintet has one of the best musical dialogues ever written. Listen out for the cello fighting for its own solo voice before conceding and joining the upper parts.

This six-movement choral work was written for Salzburg cathedral in 1780 for vocal soloists, choir and instrumental ensemble. Although it is a sacred work, you can really hear Mozart’s love for opera come through, especially in the soloists’ parts. The ‘de confessore’ part of the title was not Mozart’s own but suggests that the piece was meant to be performed on a specific day dedicated to a particular type of saint, but it’s unclear which. Try the Laudate Dominum.