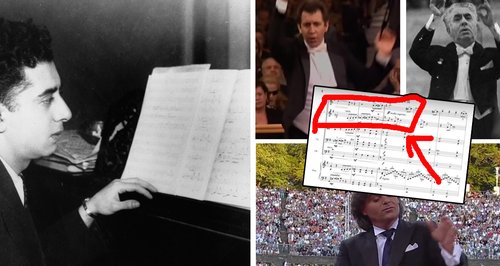 You know that bit in Khachaturian’s epic and beautiful Adagio from Spartacus and Phrygia? Well, there’s more than one way to play it…

Valery Gergiev’s reading of the whole piece might be a tad on the quick side, but he gives the slow-down section a brilliantly measured feel, rolling through it with an agreeable, tasteful amount of milking. A crowd-pleaser.

So the logic in this Vienna Philharmonic performance seems to be, ‘let’s just do it slow to begin with, and then we won’t have to bother too much with slowing down again.’ Still works, obvs.

This one looks fantastic - see how Haroun Fazlian whips the orchestra up to his quite scary speed before exploding the whole thing with some truly gargantuan cymbal. Exhilarating.

Save it for the last moment

This rather nice-looking outdoor concert is the scene of some pretty remarkable slow-down. When the slowdown starts, it sounds like it's going to just rattle straight through - but then, almost on the final two notes before that cymbal explosion, a miraculous change of character. Daring.

Well, who better to listen to than the composer himself? This 1977 recording shows Khachaturian to be a pretty methodical interpreter of his own music, and when he gets to that key section, he barely slows down at all. Listen to how he pretty much rolls straight through - the cymbal player can barely wait to smash it.