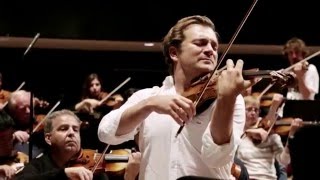 Firmly established as one of the world’s top violinists, Renaud Capuçon certainly knows how to celebrate. In the week he turns 40 he’s releasing this suitably festive album of the best-known works of three nineteenth-century composers – Edouard Lalo (born on the same day as Capuçon but in 1823), Pablo de Sarasate and Max Bruch.

The recordings were made with Paavo Järvi and the Orchestre de Paris at the orchestra’s new home, the Philharmonie in Paris, which opened in early 2015 and was immediately hailed for its superb acoustics, which are very much in evidence here.

In his choice of repertoire, Capuçon nicely draws out the connections between the three pieces: Lalo dedicated his Symphonie espagnole to the great violinist Sarasate. Bruch also dedicated his Scottish Fantasy to Sarasate some years later.

Capuçon is fully at home in the virtuoso, Romantic-era. His playing is at once full-bodied and expressive, then fiery and agile. And in the Bruch his heartfelt shaping of the long phrases is perfectly judged, while the final movement is punchy and precise.