The remarkable story of Beethoven’s ‘Choral’ Symphony No. 9 and the ‘Ode to Joy’ 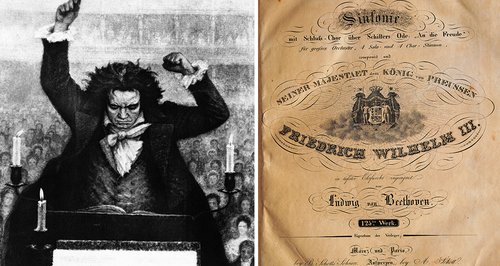 By the time Beethoven's Symphony No. 9, with its huge 'Ode to Joy' climax, was premiered on 7 May 1824, the composer was profoundly deaf.

Ludwig van Beethoven’s revolutionary Ninth Symphony is, without question, one of the greatest works in classical repertoire.

“He uses solo voices in a symphony for the first time, setting the words of Schiller’s poem An die Freude. It is the longest and most complex of all his symphonies, which we may regard it as the pinnacle of his achievement, because it is his last symphony – but he was working on his Tenth when he died.”

For almost 200 years, the famous hymnal theme to this symphony’s finale – the ‘Ode to Joy’ – has symbolised hope, unity and fellowship – across borders and through conflicts.

Here it is, performed by the ‘Global Insta Orchestra’, made up of musicians around the world, playing across the Internet.

But there’s a tragic story behind the work.

Beethoven’s ‘Choral’ is arguably the greatest symphony ever composed: the summit of his achievements, a masterful musical celebration of the human race and a massive work that makes all who hear it feel better about life. And yet, Beethoven himself never actually heard it.

The man who had done more than anyone before him to change the way we hear music had become one for whom sounds could no longer exist – and the bitter irony of this was not lost on him.

Despite his deteriorating hearing, though, Beethoven persevered with writing this mammoth symphony. Encouraged, no doubt, by his status as the composer of the moment, he penned a colossal work.

But, when Beethoven conducted its premiere, he was famously unaware of the rapturous response his ninth symphony received. It took one of the musicians to alert him to the cheering audience – and that was only at the end of the second movement.

Read more: So if Beethoven was completely deaf, how did he compose? >

What are the lyrics to ‘Ode to Joy’?

Beethoven’s Symphony No. 9 is famous for its setting of Friedrich Schiller’s poem ‘Ode to Joy’ – a text the composer had been fascinated with for over twenty years. Here’s just a short passage below.

Which translates into English as:

Joy, bright spark of divinity,
Daughter of Elysium,
Fire-inspired we tread
Within thy sanctuary.
Thy magic power re-unites
All that custom has divided,
All men become brothers,
Under the sway of thy gentle wings.

Triumphant words that perfectly match the power and scale of Beethoven’s immortal music.

How did the ‘Ode to Joy’ become the EU Anthem?

Since 1985, Beethoven’s ‘Ode to Joy’ has been the melody used to symbolise the European Union.

Although there are no words in the official anthem, the poem ‘Ode to Joy’ expresses Schiller’s vision of the human race becoming brothers – a vision Beethoven shared.

It was first adopted by the Council of Europe in 1972, before EU leaders took it on just over a decade later.

On the EU’s official website, it says: “In the universal language of music, this anthem expresses the European ideals of freedom, peace and solidarity.”