Nicola Benedetti: 'Tchaikovsky really captured the drama of what a virtuoso can do' 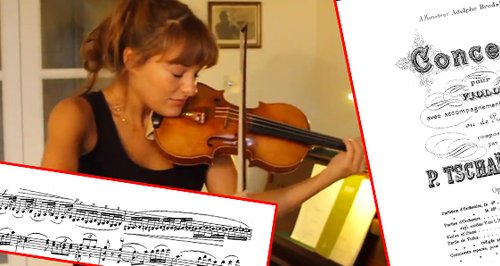 Nicola gave us an exclusive guide to one of the greatest pieces for violin and orchestra ever written.

This Saturday evening, Alex James celebrates one of this country's finest virtuosos, Nicola Benedetti. Listen to his show online at classicfm.com. And here's some Tchaikovsky to get you in the mood!

Tchaikovsky's Violin Concerto was written in 1878 and has since become one of the most popular pieces of music ever written. It also happens to have one of the most famous openings of any concerto. Here's Nicola to introduce the whole work.

The terrifying moments for a soloist

This piece is, as Nicola says, a guaranteed crowd-pleaser – but it's also fiendishly difficult. We asked Nicola to show us which sections she found the most terrifying when she first started learning the monumental work.

'The violin was beaten black and blue'

One of the very first reviews of the concerto said the violin was 'beaten black and blue'… and, as Nicola explains, there's maybe a ring of truth about that!

After the thrills of the opening movement, the second movement of the concerto is a chance to take stock and catch your breath – with all the beautiful melodies you'd expect in Tchaikovsky's music.

But that calm doesn't last for long – and with the third movement we're back into high-wire virtuoso territory, as Nicola demonstrates:

How does the piece end?

In Nicola's own words, this final movement just does not stop – and it's packed with virtuoso flourishes. She talked us through the exhausting final section:

And can we hear anything of Tchaikovsky's personal life in this music?

Tchaikovsky's personal life was often fairly troubled – when he wrote this piece he'd just come out of a pretty disastrous marriage. And the piece was written for a violinist friend – and maybe lover – of his called Iosif Kotek. But Tchaikovsky didn't dedicate the piece to him for fear of causing gossip. How much of that complicated personal life can we hear in this Violin Concerto?

You can hear Nicola performing the Tchaikovsky Violin Concerto with the RSNO this Friday, in Edinburgh, and Saturday, in Glasgow. Her latest recording, of music by Shostakovich and Glazunov, is out now on Decca and available to buy on Amazon and iTunes.

National Youth Orchestra of Great Britain: how to join, what to expect and how to ace your audition

Nicola Benedetti & Wynton Marsalis give us some classical/jazz pro tips

Nicola Benedetti: who is the star violinist, what are her best recordings and what violin does she play?